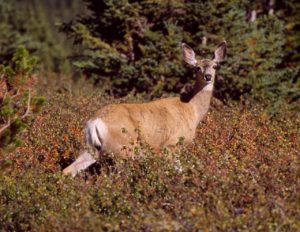 Are you interested in mule deer hunting? This ancient sport provides a wide variety of benefits. Their meat, pelt, and antlers alone are enough to make these creatures prized additions to any home. Due to their lower numbers and migratory patterns, finding these deer can be somewhat difficult. Their distinctive appearance and behavior make them a challenge to hunt as well.

Mule deer are characterized by their dark, coarse pelts, dense size, black-tipped tail, and large, white tipped ears. Unlike most other species, they move in a very fast, unusual way—rather than sprinting or vaulting the way their white-tailed cousins do, they jump in a method known as stotting, which is a series of fast, lengthy, stiff-legged jumps where all four hooves hit the ground at once. It may sound like an awkward way to move, but bolting in this way is surprisingly effective.

Unlike moose, elk, or other species, mule deer rarely make any noise, which rules out the use of bulges or other hunting calls. Their large ears also make them difficult to sneak up on—constantly in movement, they are ever aware of even the slightest sound. Their sensitive noses are also adept at picking up out of place scents.

When mule deer hunting, a common challenge many new hunters face is the issue of deer stands. While those who hunt white-tailed deer regularly benefit from using a tree stand, mule deer are typically located in vast stretches of meadows or rocky areas. Worse still, they are quite adept at spotting motion. Located throughout the west and southwest, these deer are also known for being the most active during the morning and evening, when the weather is cooler.

Many hunters, however, relish the new challenge of mule deer hunting. There is a wide assortment of techniques to consider when hunting these animals. Some are basic common sense, such as avoiding heavily scented soaps or shampoos when bathing, lest their scent give you away. Others include staying as motionless as possible and shooting when the deer has its attention focused on food or on another sound.

If you’re unaccustomed to mule deer hunting, perhaps you should consider a guided hunt. This is the act of arranging a hunt while accompanied by trained professionals. This can be especially useful if you’re unfamiliar with the terrain as well as the typical habits of the mule deer. Your guides will be able to give you tips regarding tracking, stalking, and shooting. Best of all, you’ll be able to return to a cozy cabin or campground. Many hunting outfitters of this kind also provide you with hot meals and other commodities. Learn more today about how mule deer hunting can benefit you!