Home
Articles
What Are The Best Times To Bird Watch?

What Are The Best Times for Bird Watching? 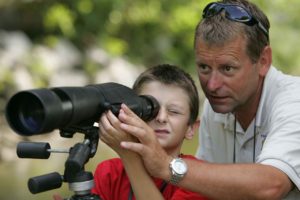 One you have the birding bug, you will want to maximize your experience when it comes to sightings. Put another way, you will need to know the best times for bird watching.

There is something to be said for the chase is most of the fun in life. If you have caught the bird watching bug, the chase is definitely going to be part of your task in gaining new entries for your life list. Simply put, there are good, okay and great times to seek out sightings. Understand these times and you will be on your way to some excellent sightings.

A common mistake when birding is to assign human emotions and behavior to the birds you are viewing. Birds may appear to react as such, but they are not following typical human behavior. Instead, they appear to be primarily reacting to stimulus. This means it is foolhardy to assume they will follow the same schedule as we do. Yes, there are some similarities, but not too many.

The old cliché is the early bird gets the worm. As with most clichés, there is something to this one. Most species of birds tend to be active early in the morning, much as humans are unless I haven’t had my coffee yet. No, birds don’t drink coffee, but many species definitely have a hankering for breakfast. Plan on heading out early if you want to sight a particular species in an active phase.

Ironically, one of the poorer times to pursue bird watching is in the middle of the day. Although birds are in view, this tends to be an inactive time for many species. A better time to catch them is in the late afternoon when activity picks up before the onset of evening.

Undoubtedly, you are thinking of a variety of species that do not fit within this general guideline and you are correct to do so. The simple fact is every type of bird has different patterns of activity. The obvious examples are owls, which certainly are not going to be of much interest during the day given the fact most species are sleeping. The lesson, therefore, is to take a close look at the particular species you are interested in and then tailor your viewing habits to its schedule.

The best times for bird watching can generally be said to be the early morning and late afternoon. To avoid the occasional disappointment, make sure to research the specific tendencies of any particular bird you wish to observe.